The points of contact between Rutgers Cooperative Extension Service and the grower & business communities are the NJ County Agricultural Agents. The agents are a tremendous source of information for both new and experienced growers. Visit your local county extension office.

For more than a decade, a general decline in ECB adult moth populations and larval infestation rates have been seen in most crops. Generally entomologists in the eastern US are attributing this long decline in ECB to increased production of BT field corn which would be a dead end host for the pest. An adult moth population bucking this trend is widely observed this spring 2011. The reasons are unclear but it is a fact. Growers are advised to scout all whorl and pre-tassel fields. 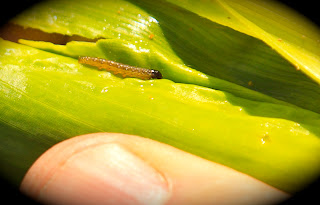 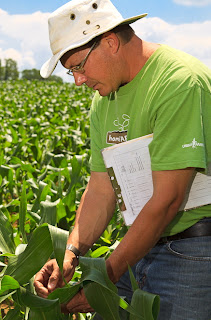 We are back into double digits some nights for this first generation in some of our better catching backlight traps and are getting solid single digits in traps we have not normally seen ECB in the last few years. In addition to backlight trap counts of adults, we're seeing widespread larval worm infestations in whorl and pre-tassel sweet corn in this first generation approaching 70% (in fields that have yet to be treated). Typically, we would expect those numbers to top out in the 20% range, at worst 30 to 40% infestation before the first treatment. These rates are not something we've seen since the early 1990's.  The cause is not clear but we are at extreme risk for infestations on ECB primarily on sweet corn. We will surely see a problem in peppers as well. ECB can also infest peppers - getting into the central stem on young pepper plants on the crown. The plant will regrow from below the point of injury.