The points of contact between Rutgers Cooperative Extension Service and the grower & business communities are the NJ County Agricultural Agents. The agents are a tremendous source of information for both new and experienced growers. Visit your local county extension office.

[NOTE: Storm related crop and/or equipment damage/losses due directly to the storm or from exposure to the high temperatures and intense sun following the storm should be reported to your local USDA Farm Service Agency office as soon as possible.]

Sources: Accuweather.com, NOAA, Wikipedia
While you probably have another “D” word or adjective in mind to describe the storm that hit OH on June 29th the correct meteorological term is “derecho”. A derecho is a widespread, long-lived, straight-line windstorm that is associated with a fast-moving band of severe thunderstorms.
Generally, derechos are convection-induced and take on a bow echo form of squall line, forming in an area of divergence in the upper levels of the troposphere, within a region of low-level warm air advection and rich low-level moisture. The June 29th storm went 700 miles from Indiana to the mid-Atlantic coast in just 12 hours at an average speed of 60-65 miles per hour. Check out the radar graphic from NOAA. Wind gusts were clocked at the Ft Wayne, IN airport at 91 mph and the Columbus airport at 80 mph, equivalent to a category 1 hurricane. It maintained this violent wind even when it reached Tuckerton on the south Jersey coast where gusts were clocked at 81 mph. 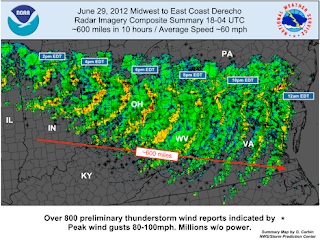 In Ohio, the violent wind snapped power poles in half, blew tractor trailers off the road and quickly took down trees, leaving many without electric power for a week or more. The electronic news zipper on the Columbus Dispatch building in downtown Columbus said on Friday night, over 10 million people were without power from the mid-west to the mid-Atlantic coast.

DERECHO DEVELOPMENT necessarily is tied to the formation of bow echoes. A bow echo usually arises from a cluster of thunderstorms, but also may evolve from a single strong storm. Bow echoes most frequently occur when tropospheric winds are relatively strong and unidirectional (i.e., they vary little in direction with height). As the rain-cooled downdraft of a thunderstorm reaches the earth's surface, it spreads horizontally, most rapidly in the direction of the mean tropospheric flow. As the cool, dense air spreads outward, it forces the lighter, warm and moist air surrounding the storm up along the leading edge of the outflow, or gust front. The upward motion along the gust front typically is greatest along that part of the front that is moving most rapidly, that is, in the downwind direction. Gust fronts often are marked by a band of ominous, low clouds known as "arcus."

----
The derecho described by Bob moved across southern NJ starting shortly after midnight and leaving the Atlantic coast by about 1:40am on Sat., June 30th. In what can only be described as an unbelievable, constant strobe light accompanied by a cacophony of constant winds, it left a path of toppled trees, telephone poles and electric wires and over 200,000 households without power across much of Salem, Cumberland, some of Cape May and the lower half of Atlantic County. The most damage was caused by falling trees either pulled from the ground or snapped off anywhere from ground level to the upper trunks. Restoring power took anywhere from a few hours to 9 days, but was fully restored by this past Sunday. Cleanup of downed trees and dangerous, hanging 'widow-makers' continues across the region. Luckily, crop damage, at least in Atlantic County, was minimized as the storm passed just south of most of the blueberry fields, and much of the Vineland area farm fields were fallow between spring crop clean-up and fall crop planting. The most significant damaged was to a few pepper fields that were laid over exposing nearly mature fruit to sunburn in the days following the storm.